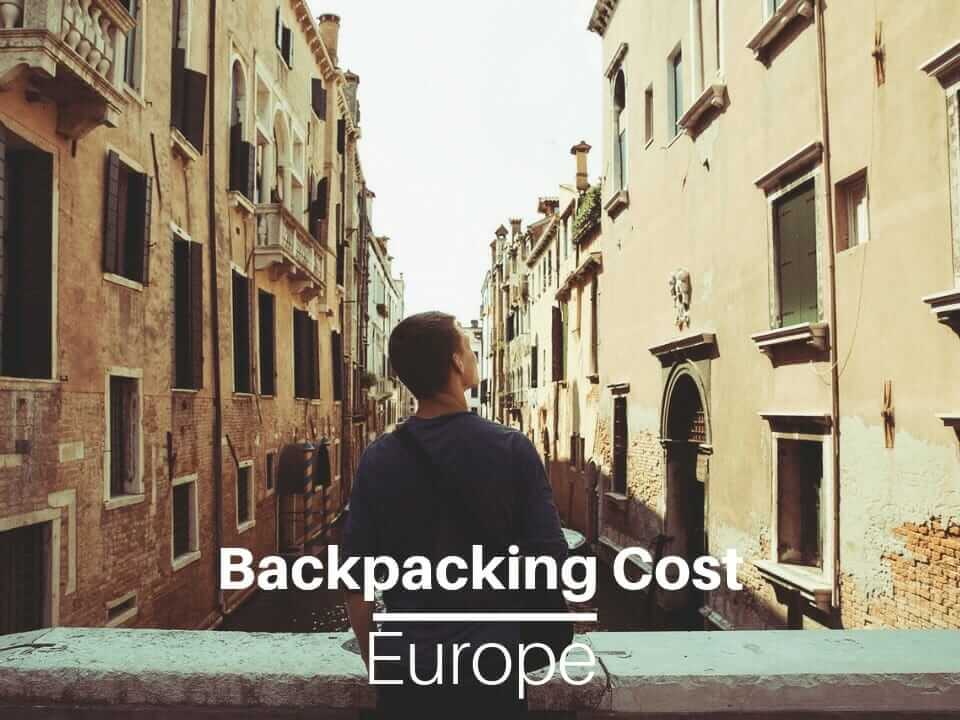 The cost of backpacking Europe doesn’t have to be expensive. By meticulously tracking my expenses, I was able to calculate my daily budget for backpacking Central Europe.

For less than $75 a day, I traveled through Central Europe for 4 weeks back in the fall of 2018. Combine that with cheap flights to and from the US on a budget airline and you’re looking at a total trip cost just a few hundred dollars more than you would have spent in the same amount of time living back home.

In this blog post, I want to walk you through the actual cost of traveling through Europe based on my real-world experience doing just that.

Cost of Backpacking Through Europe for a Month

I backpacked Central Europe for 4 weeks in the fall of 2018 and spent less than $75 per day. During this time I visited 10 cities in Europe and 7 European countries. The cheapest European city that I visited was Prague by far where I only spent on average $32 per day. Conversely, Munich was the most expensive city due to Oktoberfest, but after that Copenhagen and Amsterdam topped the list.

Now I realize Copenhagen and Amsterdam aren’t usually considered part of central Europe, but this is where I started and ended my trip. My flights to and from Europe were less than $300 each. However, I frustratingly had to pay an extra $94 for a carry on bag at the gate, but that’s a story for another day. All in all, flying to Europe from the US only cost me $583.97 roundtrip.

Without considering flights, I spent $1,928.39 backpacking Central Europe for 4 weeks. That works out to an average daily budget of $74.17 per day. So for less than $75 per day, I had food, lodging, transportation, and entertainment.

Below, I present to you my Central Europe itinerary and the price of traveling in each European city.

Although everyone’s experience is going to differ, I can only share with you how much backpacking Europe cost me per day as a solo traveller. Consequently, you can use this information to understand the relative price difference between different countries in Europe.

For example, clearly Prague and Budapest are much cheaper travel destinations than Copenhagen and Amsterdam.

Therefore, don’t expect to spend the same exact amount as me, but rather use these numbers as a general daily budget for your own trip to Europe.

1. Cost of Travel in Copenhagen

Copenhagen, relative to other cities in Central Europe, was quite expensive. In fact, Copenhagen was the second most expensive city of my trip where I spent on average $93.85 per day.

I stayed at the Urban House Hostel in Copenhagen for three nights which cost me around $29 per night. Other large expenses in Copenhagen were eating out at restaurants such as Warpigs, Trivoli tickets, and drinks with fellow backpackers.

Although I only spent one night in Hamburg, I managed to spend $85.35. This includes one night at the MAC City Hostel for $30 and my Flixbus ticket from Copenhagen to Hamburg for $34.

I only stayed in Hamburg for one night because the weather was quite rainy and cool.

3. Cost of Travel in Berlin

The next stop was Berlin where I spent 3 nights at the Baxpax Hostel. Although this hostel cost me less than $22 per night, I don’t recommend staying here at all. The shared dorm that I stayed in was not only sketchy and dark, but it had an outrageous 40 beds.

Because it also rained while I was in Berlin, I didn’t get to do much other than a free walking tour. This is probably why the cost of travel in Berlin for me was only $55.42 per day. In addition, the Flixbus from Hamburg to Berlin was only $9.61.

I took full advantage of the fact that Krakow, Poland is super cheap and spent $61.86 per day during my three days there.

Lodging at hostels cost me just $6.47 per night! I stayed at the Let’s Rock Hostel the first two nights and the Pink Panther Hostel the last night.

Although backpacking Krakow costs are relatively cheap, the majority of my expenses came from entertainment and drinks. I participated in an Auschwitz tour through SeeKrakow which cost me $46.90. I highly recommend this. Additionally, my Flixbus from Berlin to Krakow cost me $26.32.

The cost of Budapest travel is also another relatively inexpensive European destination. Two nights in Budapest only cost me $46.06 per day, and here I splurged a bit.

I stayed at the Vitae Hostel in Budapest which cost me around $10 per night. Because Budapest is pretty large, I splurged and did a City Sightseeing Budapest hop on/hop off tour bus which allowed me to see a great deal of the main attractions. Additionally, I spent some time at the Széchenyi Thermal Bath. Together, these Budapest experiences cost me $18.05 and $19.49 respectively.

Other than that, Budapest is a very budget backpacker friendly European city. My Flixbus ticket from Krakow to Budapest was $14.28.

One night in Vienna cost me $69.64. While my RegioJet bus ticket from Budapest to Vienna was only $11.35, I ended up spending close to $20 to get my laundry done.

A dorm room in the Meinniger Hostel only cost $11.99; however, this was pretty far outside of the historic area of Vienna. I went pretty cheap with food in Vienna only eating McDonalds, hostel breakfast, and a cheap $4.70 Doner Kabab.

The next stop was Munich, Germany for Oktoberfest. Flixbus got me from Vienna to Munich for $27.

I spent the most amount of time here—a total of four nights. Because Oktoberfest was happening, the prices for lodging were disgustingly expensive. Four nights at the 4You Hostel cost me $286.73. That’s $72 per night for a shared dorm room!

Although I meticulously kept track of my expenses during my European trip, Oktoberfest is one area where my exact expenses are a bit fuzzy. I estimate that I spent close to $200 on food and drinks at Oktoberfest alone over the course of two days at the festival. Oktoberfest is fun, but certainly not cheap.

In addition to Oktoberfest, I participated in a free walking tour, went to the top of St. Peter’s Church, and walked around Munich to save some money. In all, I spent $527.10 in Munich which is on average $131.78 per day.

After four nights in Munich, I traveled to Salzburg, one of my favorite cities, on Flixbus for under $10. I stayed in Salzburg for 3 nights at Meininger in a hostel dorm for $33 per night—one of the more expensive, but nicest hostel of the trip.

I saved some money in Salzburg by eating food from the supermarket. On the other hand, I bought the Salzburg Card for $32.90 which gave me 24 hour access to most of Salzburg’s attractions. During this time, I went to Mozart’s birthplace and took a bus to the Untersberg Cable Car where I rode to the top of the Alps.

In addition to this, rather than paying for a Sound of Music tour, I walked around Salzburg and visited multiple filming locations of the movie on my own.

Considering my Flixbus from Salzburg to Prague alone cost me $20.38, you would think that I spent more than $32.27 per day in Prague. However, since lodging at the Travel&Joy Hostel only cost me $7.84 per night, Prague ended up being a cheap European city to travel to. In fact, I spent the least amount of money during my two nights in Prague than any other European city.

Even though I ate out at restaurants and drank, the cost of backpacking Prague was inexpensive thanks to prices being so low to begin with—especially beer. A pint of beer costs close to a US dollar in Prague. You can probably find it cheaper than that.

I filled my time with a free walking tour which I extended on my own to see both side of the Vltava River.

My last stop on my European backpacking trip was Amsterdam. I ended up flying from Prague to Amsterdam since this long distance would take well over 14 hours by bus with multiple stops.

Three nights at the Stayokay Hostel in Amsterdam cost me $37.82 per night. Aside from the price-gouged hostel in Munich for Oktoberfest, this was the most expensive hostel I stayed in.

While you can spend days walking around the canal-lined streets of Amsterdam (which is what I did), food and drinks are more pricy than say Prague, Krakow, and Budapest for example.

All in all, I spent on average $83.48 per day traveling Amsterdam. 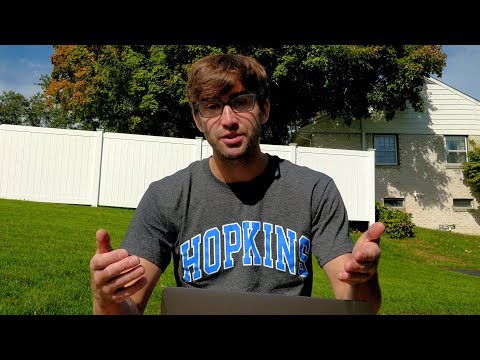 How to Save Money When Traveling to Europe

As you can see, the average cost of backpacking Europe differs from one country to the next. While places like Krakow, Prague, and Budapest are on the cheaper end, Amsterdam and Copenhagen are more expensive.

In general, countries in Western Europe tend to be the most expensive travel destinations. Prices will drop the further east you go in Europe. In other words, Central and Eastern Europe are most friendly to budget travelers.

While transportation costs will probably be your biggest expense, you can save money by taking affordable public transportation. In addition, if you have the time, traveling longer distances over land versus air will save you big.

As far as lodging is concerned, hostels will be your cheapest option. Rather than paying over $100 for a private room, you need to sacrifice a bit of your privacy for a shared dormitory in a hostel.

Finally, you cannot eat out at restaurants every day when traveling—especially for long term trips. A restaurant every once in a while is okay, but your primary source of food should be coming from a grocery store or supermarket.

From my experience, if you follow these money-saving travel tips, you will stretch every dollar to last longer which will allow you to travel for longer.

I put together a list of my best budget travel tips for backpacking Europe here, so you can check that out next.

Do you have any questions about the cost of backpacking Europe? Let me know in the comments below.