Europe has a reputation for being an expensive travel destination, and for the most part this is true, but with some basic budget travel tips, you can experience Europe on the cheap without sacrificing your experience.

Here’s exactly how to travel Europe on a budget.

Right off the bat, where you travel in Europe is going to dictate how much you spend. In general, the further east you go in Europe, the cheaper everything is.

I only spent $30/day in countries like Poland and Prague, and this number includes everything:  lodging, food, and transportation.

On the other hand, countries in the west like Spain and France are generally more expensive. Now while this is true, it’s still very possible to travel there on the cheap, it’s just going to be a little harder.

Free walking tours are technically free as the tour guides are volunteers; however, it’s customary to tip them for their time.

3) Buses and Metro for Local Transportation

You can’t walk everywhere in Europe, but don’t even think about taking a taxi. Instead, a much cheaper option is public transportation like the city bus or metro.

In certain cases, I will only recommend using a ride hailing service like Uber as these rates are typically fair when compared to metered or a negotiated rate with a cab driver.

Most people will tell you that busses are the cheapest way to get around Europe. This is often true; however, there’s a quicker and often cheaper option. No, I’m not talking about flying on a budget airline. I’m talking about a carpooling app in Europe called BlaBlaCar.

With BlaBlaCar, locals post the date and time of their road trip between cities, and riders sign up for a seat. I was very skeptical at first, but after using this numerous times in Spain, I’m now a huge fan.

Like I said, the best part is that BlaBlaCar is often the cheapest and quickest option… besides probably hitchhiking. As an example, I did a search for a trip from Prague to Munich.

Now I’m not saying this is always going to be the case. Just do your research to see which option is the best for your situation.

Hostels are going to be one of your cheapest options for lodging in Europe. If you don’t mind sharing a dorm room with some fellow travelers, you can get a bed for as low as $5/night in some central and eastern European cities. As you move west, hostel prices average $20 to $40 per night.

Just make sure you book your hostels direct to avoid HostelWorld booking fees.

Airbnb, slightly more expensive but still affordable, is another great option for lodging in Europe.

Either way, just avoid staying in hotels which will set you back at least double what a hostel will cost you.

I’d say that about a third of your European expenses are going to be lodging, but if you want to cut this cost significantly, you have two options.

The first is to stay for free with Couchsurfing. While I personally haven’t used it, the Couchsurfing app allows locals to offer up a spare bed, air mattress, or couch travelers.

The other other, while not free, is to camp. For the cost of a tent and whatever the nightly rate is, camping is a great way to save on lodging costs. This one, of course, will only work certain times of the year and outside of the big cities.

Another big portion of your expenses in Europe is going to be food. This is especially true if you eat at restaurants for every single meal.

8) Dine Out, But Carefully

Now I don’t expect you to never eat at a restaurant, but when you do, here are a few tips for saving money on food.

First of all, avoid eating in touristy areas. Seek out where the locals eat and go there. Not only is the food here going to be cheaper, but it’ll probably be more authentic. The exception here is of course those world famous restaurants like, for example, the ones that I went to in Naples, Italy.

Street food is another great way to save money on food. From a $4 bratwurst sandwich in Germany to $3 perogi in Poland, Europe can actually be a pretty cheap place to eat.

One last food tip is to order the daily special if available. One restaurant with a particularly fantastic daily special in northern Spain had a three course dinner and all you can drink house wine for €9 a head.

9) Be Smart With Your Cell Phone

Let’s talk about SIM cards next. Unless you have a plan like T-Mobile or Google Fi with free international data, don’t pay extra to use your phone abroad.

While you can definitely get by with public WiFi and WiFi at your lodging, if you want your phone to work abroad, get a local SIM card. You can get one of these for as little as $20 for an entire month that will work across most of Europe.

If you’re new to SIM cards, check out my video on this topic, but not before we talk about my final budget travel tip.

To avoid international transaction and ATM fees, you need to know a few things.

First of all, make sure you have a credit card that doesn’t charge international transaction fees. I don’t care which one you get, but you’re literally throwing away your money if you don’t have one of these.

Next, when using your credit card abroad, make sure you charge it in the local currency, not US dollars. This confused the heck out of me the first few times I was given the option, but by letting your credit card choose the exchange rate rather than the merchant, you’ll avoid paying extra.

Finally, avoid ATM transaction fees. My debit card from Charles Schwab not only has no foreign transaction fees, but it reimburses me for ATM fees. So for example if an ATM charges me 5 euros to withdraw money, Schwab will reimburse me. 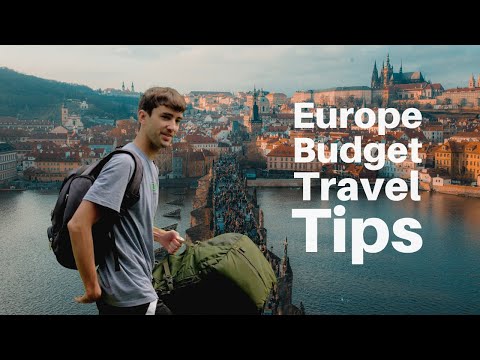 For a detailed breakdown of how much I spent in each European city, read this blog post next. If you have any questions about backpacking Europe on a budget, let me know in the comments below.