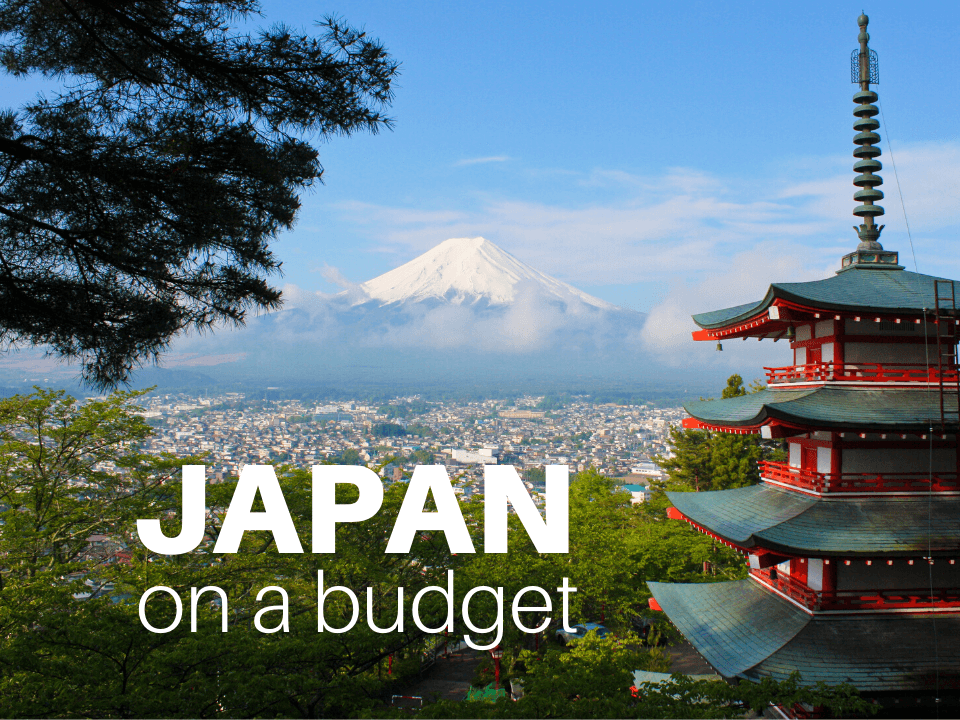 Wether you’re planning a trip to Japan or are already there and desperate for budget travel tips because of how expensive it is, you’re in the right place. Based on my six-week journey around Japan, I came up with this list of practical budget travel tips to save you money.

Most travel bloggers will tell you that you should expect to spend upwards of $175 daily in Japan. On the contrary, I spent less than $60 per day during my month and a half in Japan.

As a budget backpacker myself, I visited Japan with the intention of seeing the country without spending a fortune. Having successfully done this, I offer you the following Japan travel tips without sacrificing your experience.

Wether you’re in a large city like Tokyo or a small Japanese village, you’re likely to find at least a few convenience stores. The three main convenience stores in Japan are Lawson, 7-Eleven, and my personal favorite FamilyMart.

Much different than the United States, Japanese convenience stores are fantastic. Not only do they sell high quality food on the go, but prices are extremely reasonable. For example, you can get a six pack of sushi for just a few hundred yen or a fresh salad for right around the same price. My personal favorite is the Onigiri, a stuffed Japanese rice triangle that sells for around ¥100 in most convenience stores.

Additionally, if you’re a coffee drinker, buy your coffee at FamilyMart or Lawson. At Starbucks or Tully’s, you’ll pay upwards of ¥430 for an iced coffee. But at one of these Japanese convenience stores, the came exact cup of coffee will cost you just ¥180. 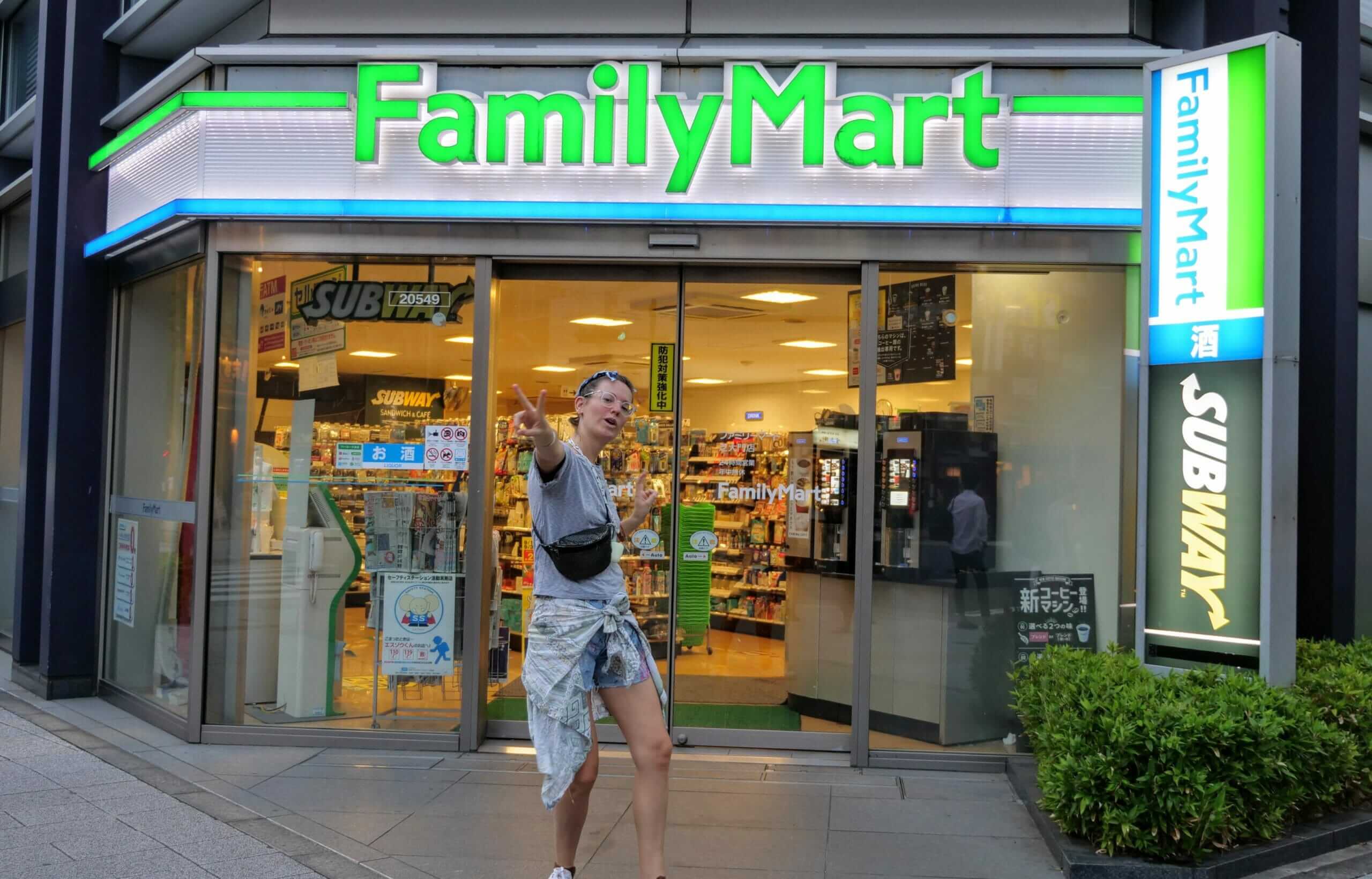 2. Cook Meals Instead of Always Eating Out

Having access to a kitchen when traveling can save you some serious cash. Wether the kitchen is in your Airbnb or a shared kitchen at a hostel, cooking your own meals is always going to be cheaper and healthier than eating out.

Now a lot of people will argue with me and tell me that they want to experience Japanese culture. They didn’t fly halfway around the world to cook a meal. Instead, they want to eat real Japanese food at a restaurant.

What I tell them is that the vast majority of people in Japan eat home cooked meals. By eating out at a restaurant, especially the ones catered towards tourists, you’re really not experiencing authentic Japanese culture.

Don’t get me wrong, I eat out at restaurants everywhere I travel. But in order to save money, I usually eat breakfast and at least one other meal that originated from a grocery store everyday. So this could be something like a packed sandwich and fruit for lunch or a homemade salad with a curry rice for dinner.

While we’re on the subject of eating out at restaurants, one that you don’t want to miss in Japan is the conveyor belt sushi restaurant. Here, plates of sushi wind past every table in the restaurant on a rotating conveyor belt and guests can pick and choose the plates they want.

Usually, the plates of sushi are color-coded where each color represents a certain price. You have to careful here because some higher-end restaurants will lure you in by advertising ¥100 plates. However, the vast majority of the good sushi will come out on plates upwards of ¥500. 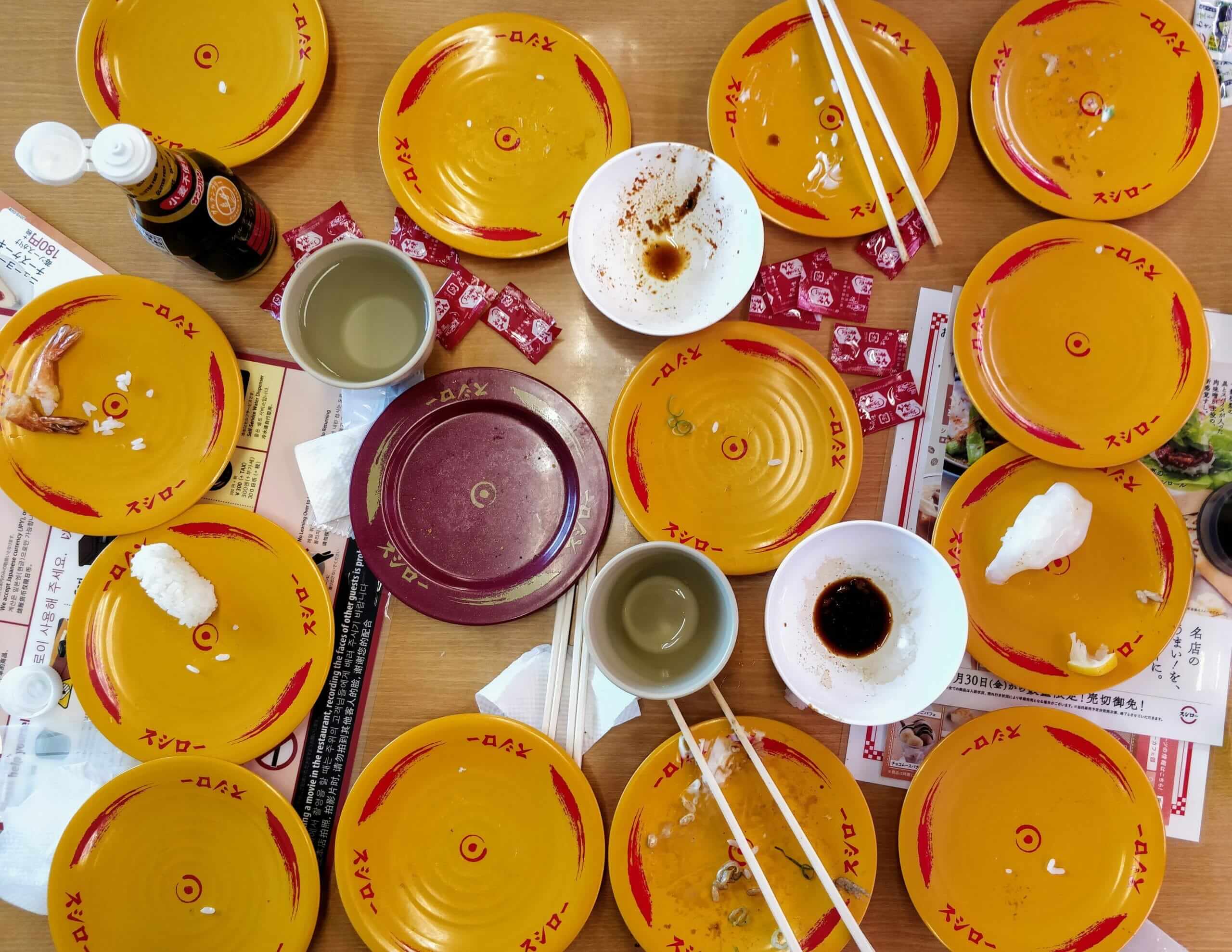 My recommendation for a cheap but delicious conveyor belt sushi restaurant is Sushiro. Sushiro in Japan is like McDonald’s everywhere else in the world, except just about everything is on the dollar menu. That’s right, most sushi plates cost only ¥100. Depending on how hungry you are, expect to spend on average $7 or $8 per person for a meal that will surely fill you up.

This next tip is general advice for budget travel and a frugal lifestyle as a whole. As discussed, it’s okay to eat out at a restaurant occasionally, but when you do, don’t order alcoholic drinks. Restaurants make a huge profit by up-charging you on beer, wine, and spirits.

You can get the same exact local beer or glass of wine from a convenience store at a fraction of the price. I much rather see you order an appetizer or dessert than spend more than you should on alcohol at a restaurant.

Similarly, avoid buying bottles of water everyday. While water only costs at most a few hundred yen, this really adds up over the course of a long term trip.

Instead, fill up a reusable water-bottle and drink the filtered water that’s available at your hostel or Airbnb. In cases where filtered water isn’t available, most lodging options have an electric kettle where you can boil tap water before drinking.

6. Forget About Taxis and Rental Cars

Japan is notorious for having expensive transportation.

For most budget backpackers, renting a car is out of the question. The rental car alone will cost you hundreds of dollars, and that’s not even including the fuel. And don’t get me started with tolls. The 5 hour drive from Kyoto to Tokyo will cost you ¥10,500 in expressway tolls alone.

On the other hand, what about taxis? Now although Japanese taxis look pretty cool and they can save time, they are insanely expensive and should only be used as a last resort.

While Uber and a similar ride hailing app called Didi are available in Japan, these options are not any cheaper. For example, a 3 mile/15 minute ride across town from the Tokyo Tower to the Shibuya Crossing will cost you at least ¥2,700. Instead, take the metro for the same trip and only pay ¥280.

7. Save on Transportation with a JR Rail Pass

So if taxis and driving a car are out of the question, how do you get around Japan? Fortunately, Japan has some of the world’s best public transportation. It’s timely, clean, but still pretty expensive.

While paying à la carte for your metro and bus tickets within a city is probably your best option, it’s worth considering a Japan rail pass for intercity transportation. 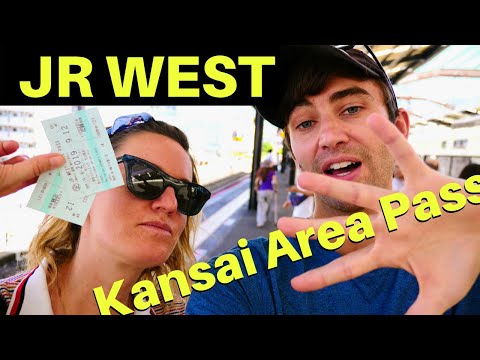 There are numerous different Japan Rail Pass options. While the nationwide Japan Rail Pass gives you unlimited use of the entire JR network of trains and busses, this is going to be your most expensive option. A seven-day pass is the cheapest Japan Rail Pass for ¥29,650 which averages out to ¥4,235 per day.

BONUS BUDGET TRAVEL TIP: Purchase your JR Pass online before you arrive in Japan for a foreigners discount!

Quite honestly, I can’t justify purchasing the nationwide JR Rail Pass when there are cheaper, regional passes available. While there are dozens of regional rail passes, we ended up purchasing the Kansai Wide Area Pass for ¥10,000.

At an average of just ¥2,000 per day, this pass gave us five days of unlimited travel between the southern tip of the Wakayama Peninsula where we saw Japan’s tallest waterfall (Nachi Falls), all the way up north to the breathtaking Ine fishing village.

Now if we would have purchased individual train tickets, I estimate that this same trip would have cost us over ¥25,000, so the savings are real. However, to get your money’s worth, you’ll need to cover a lot of ground during a short period of time. This means sleeping in a different city or village every night

8. Rent a Bike to Get Around 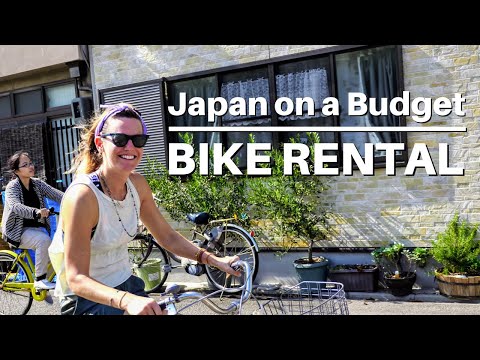 Now it goes without saying that a secondary benefit to renting a bike is the additional exercise you’ll get. One day in Japan, we rode our bikes well over 20 kilometers from our Airbnb clear across Kyoto to the other side of the city and back. The same route on public transportation would have costs us twice as much as our bike rental fee.

If you want to enjoy the luxury of having a 4G data connection on your cell phone in Japan, you’re going to have to pay a big premium. Data plans in Japan are at best on par with service providers in the US and Australia. 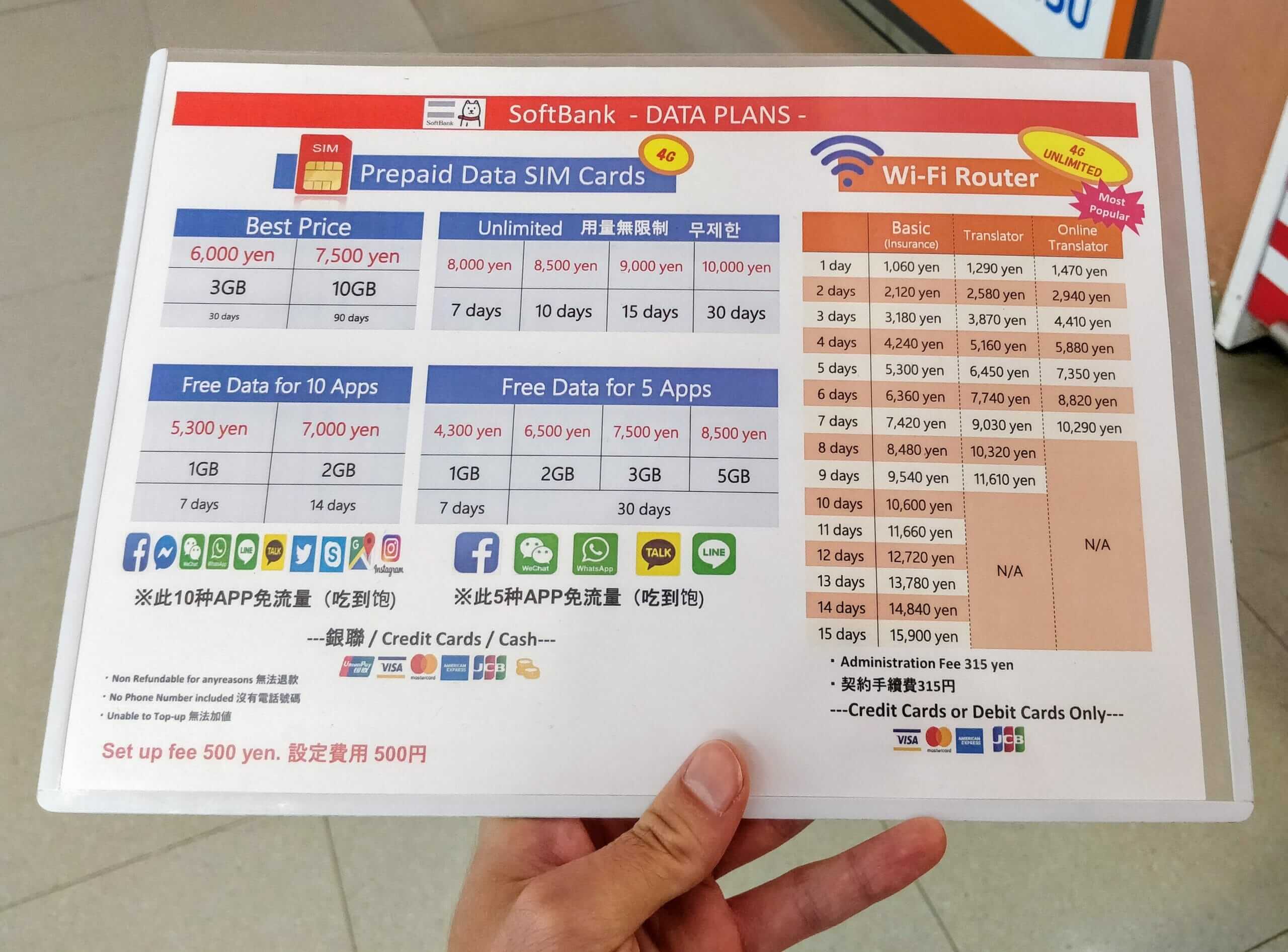 But thanks to a decent amount of free public WiFi, complimentary WiFi in restaurants and convenience stores, and internet at your lodging, you can save yourself thousands of yen and forgo buying a SIM card and still be connected.

SIDE NOTE: One hiccup that I found with not having a 4G connection was the fact that offline maps aren’t available on Google Maps in Japan.

10. Stay in a Hostel, Airbnb, or Capsule Hotel

Lodging can get pretty expensive in Japan. No different from the United States, hotel rooms can sell for hundreds of dollars per night. However, you can save big money by staying in a hostel, Airbnb, or capsule hotel.

While you may think a hostel is going to be your cheapest option, this wasn’t always the case. We spent ¥3,500 per person for a bed in a 12-person capsule-style dormitory in Katsuura.

Some of our cheapest lodging was in an Airbnb. In Osaka, our tiny Japanese-style private room cost us just over $21 per night. We also did pretty good in Tokyo where lodging is insanely expensive with an Airbnb that cost us just $38 a night. In general, you can expect to pay ¥3,000 per night for a hostel bed in Tokyo.

Japan may be an expensive country, but with some advance planning and common sense, you can travel around the Land of the Rising Sun without spending a fortune.

I estimate that these budget travel tips will save you hundreds of dollars over the course of a 2-week trip to Japan. More if you stay longer.

If you have any questions or comments about budget travel in Japan, let me know in the comments below.