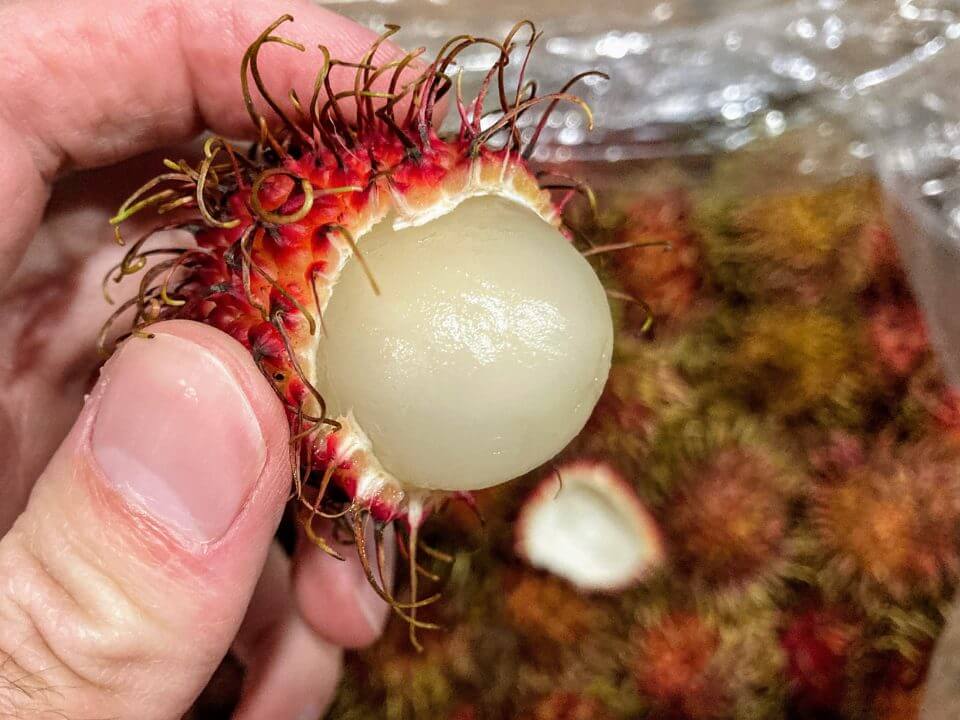 The first time I was exposed to rambutan was in August 2017 when I saw these hairy, alien-looking red things at the bottom of the weekly fruit basket at work. All the bananas, pears, and apples were quickly snatched up by my co-workers, but no one dared to touch the rambutan. Probably not only because of their offputting appearance, but also because nobody had a clue what they were.

Fast forward to my 2019 trip to Southeast Asia where I was reintroduced to this tropical fruit. Here I discovered my love for rambutan.

Assuming that you’re already on the rambutan fan wagon, this post aims to share my experience with rambutan including where you can get them and how much they cost.

Where to Buy Rambutan

Rambutan are readily available throughout Southeast Asia. In my experience, I was able to purchase rambutan in Laos, Thailand, and Indonesia at supermarkets and from street vendors alike.

On overage in Asia, rambutan sell for $1 USD per kilogram which equates to $1 per 2.2 pounds, or let’s just say $0.50 per pound. Contrast this to the cost to buy rambutan in the United States which starts at $3/lb.

Yes, you can buy rambutan in the US. Here is a list of places in the United States where I was able to buy them.

Sprouts on the other hand sold an 8 oz carton of rambutan for $3.99 which is the most expensive I’ve seen in the US. This was in October 2021.

All the packaging of the rambutan at Lee Lee and Sprouts indicated that the fruit was grown in either Guatemala or Honduras.

In June 2022, I found rambutan selling at Super 1 Foods in Bonners Ferry, Idaho. They were commercially mislabeled as Korean Melon and selling for $4.98/lb which would have been a good deal compared to the $11.98/lb that the single rambutan rang up for which cost me $0.48.

Turns out these rambutan were past their prime which was easy to tell due to their dry nature and brown color.

Can You Buy Rambutan Online?

You can buy rambutan online. Melissa’s Produce sells rambutan online year-round. The cost as of January 2022 is $12.59/lb with a 2 pound minimum order. These are not from Southeast Asia, but rather the USA, Mexico, Honduras, or Guatemala.

Can You Grow Rambutan in the US?

Additionally, my friend found a stall at the farmers market in Key Biscayne selling rambutan by the pound. This was in May 2021. I don’t have pricing on these, but they were actually grown nearby in southern Florida in the United States.

To date, I have only seen loose rambutan being sold in the United States. In case you aren’t familiar, the fruit is sometimes sold “on the vine”, especially in parts of Asia.

Can You Buy Rambutan in Canada?

Yes. Here are places where I was able to find rambutan in Canada.

The information in this post is by no means comprehensive. I’m confident that other speciality grocery stores and international supermarkets sell rambutan too.

Were you able to buy rambutan in the United States or Canada? If so, let us know below where else we can find them!

If you like rambutan, then you probably also like mangosteen which can also be bought in the US and Canada.