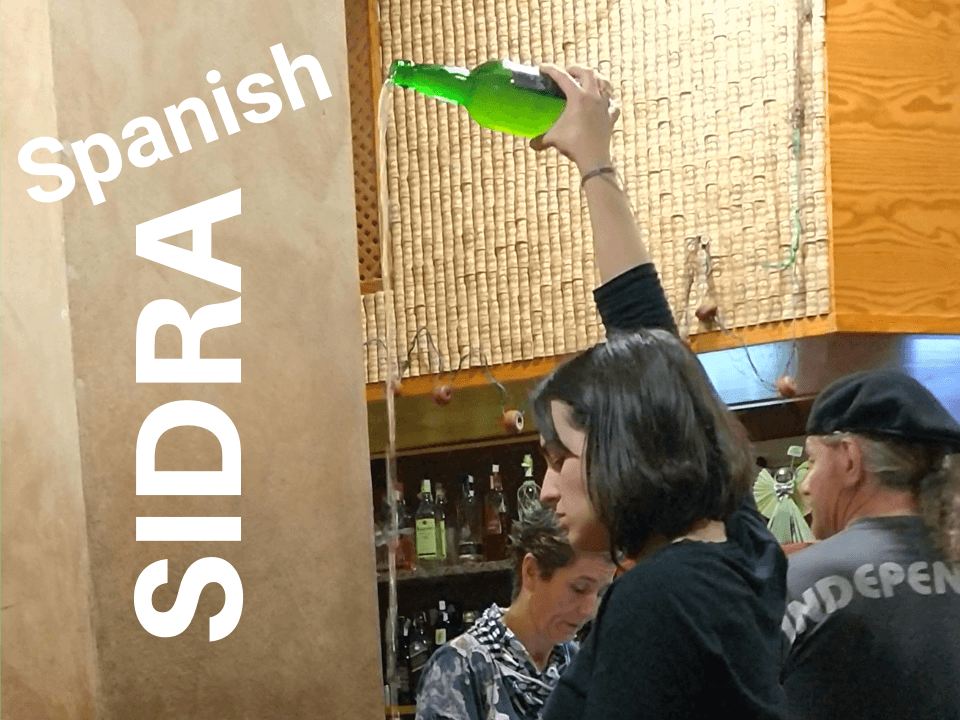 One of the first things you’ll notice in Northern Spain is how cider is poured into a glass. After that, you’ll be shocked (as I was) to find out that Spanish sidra is meant to be downed right away.

Learn about the beautiful art of pouring and drinking cider that is unique to only a few regions in Northern Spain.

Cider is called sidra in Spanish. When you’re in Spain, especially the northern region of Spain, you’ll find dozens of cider bars called sidrerias. These sidrerias are very common in the Cantabria, Asturias, and the Basque regions of Spain. 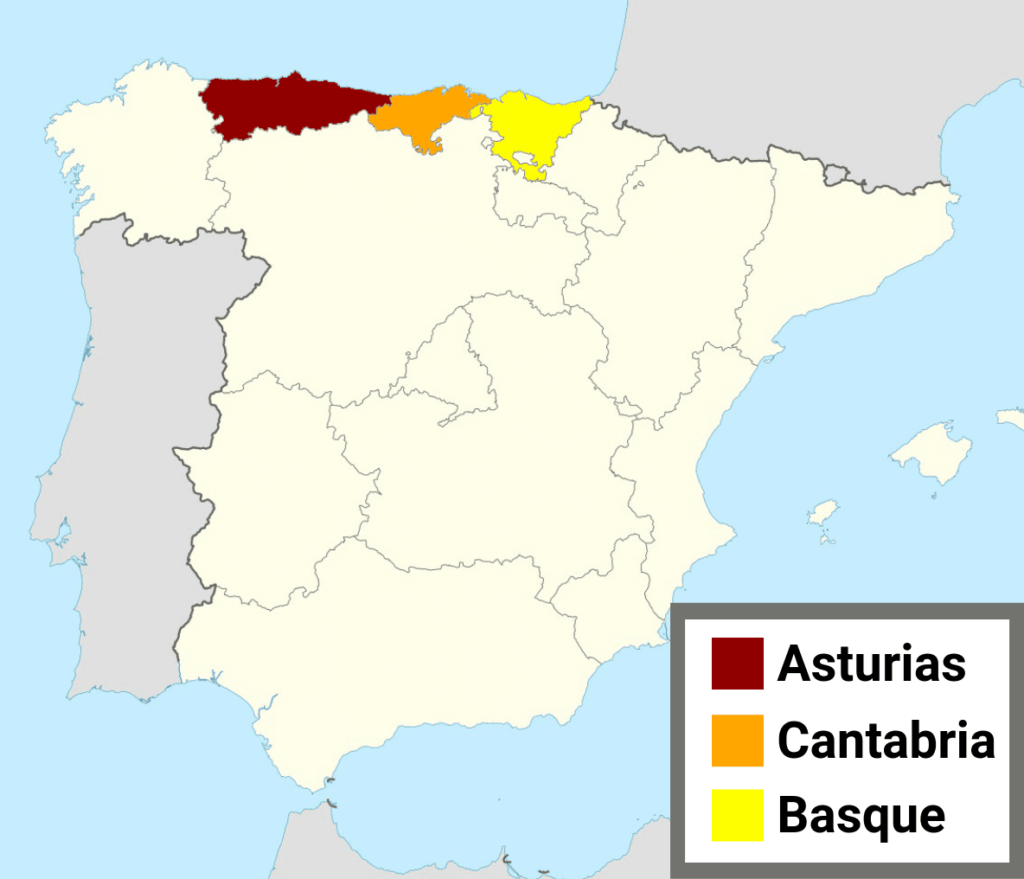 But I knew nothing of sidra or sidrerias before coming to Spain.

I traveled from Madrid to Northern Spain in May 2019 in search of the beach. Instead, the weather was rainy and cool, so the highlight of my time there became the cider.

My first experience with Spanish cider was in Candás, a small coastal town just outside of Gijón. While eating tapas in Candás on my first night, I noticed the waitress oddly pouring a drink from a green bottle into a customer’s glass… from above her head! I was intrigued, but just thought she was putting on a show.

I discretely took a video of her performing this act that I’ve never seen before.

The next day as I was walking around Candás, I came across a window full of those green bottles from the night before. They were all ciders, and the bar was called a sidreria.

At this point, I was still a Spanish sidra virgin. That would soon change.

After a very late dinner that same day, which is common in Spain, we went out for drinks. I had my Spanish speaking friend order me a sidra. I watched in joy as the bartender poured my cider from high above his head. He handed me the glass that was well under 1/4 of the way filled. 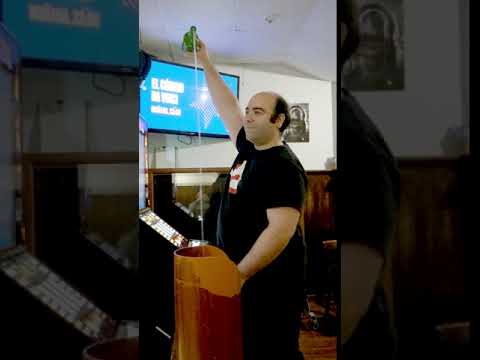 I politely waited for my friend’s drink to be served before drinking my cider; however, the bartender noticed that I hadn’t drank my cider yet.

Because I couldn’t speak Spanish, the bartender explained to my friend that Spanish sidra must be consumed immediately after pouring. You see, the whole point of pouring the cider from such a height is to add bubbles of oxygen to the drink. As a result, the sidra must be drunk right after it’s poured.

I drank the unbubbly cider anyway, and it tasted pretty dry and flat.

The bartender then poured me another round of sidra. This time I drank it right away. The sidra was much tastier that time around. I was actually shocked at how much better the sidra tasted.

Drinking cider from the Asturias region of Spain is much different than American cider. While the style of cider in the US is typically sweet, Asturian sidra and most Northern Spain sidra are much drier.

Popular ciders in the United States are Redd’s and Angry Orchard. One of the ciders I drank in Spain was Sidra Natural Llagar de Fozana from the Sidra Fanjul company.

While I’m not sure what variety of apples US cider companies use, I do know that Spain primarily uses the crabapple in their ciders. Additionally, I highly doubt that Spain adds sugar to their sidra whereas there’s a good chance the US does.

The Cider Boulevard in Oviedo

The next stop on my journey was Oviedo, the capital of Asturias. Not only did this this medieval town have lots of gothic statues and architecture, but it also had an entire street dedicated to sidra—Gascona Street.

This two block stretch of undrivable road was lined with one cider bar after another. On a nice day, you’ll find patrons enjoying their sidra street-side at tables in front of the sidrerias. It seems like every direction you look you find another cider pourer pouring sidra from a great height.

If you’re wondering how to pour cider, the Cider Boulevard in Oviedo may be the best place to learn. On the other hand, don’t hesitate to practice at home. I suggest you start by practicing with water as you don’t want to spill the sidra.

All jokes aside, it’s not uncommon for a sidra pourer to spill a bit of sidra when pouring. That’s what you’ll find specially shaped buckets or barrels in these cider houses and bars to catch any spillage. 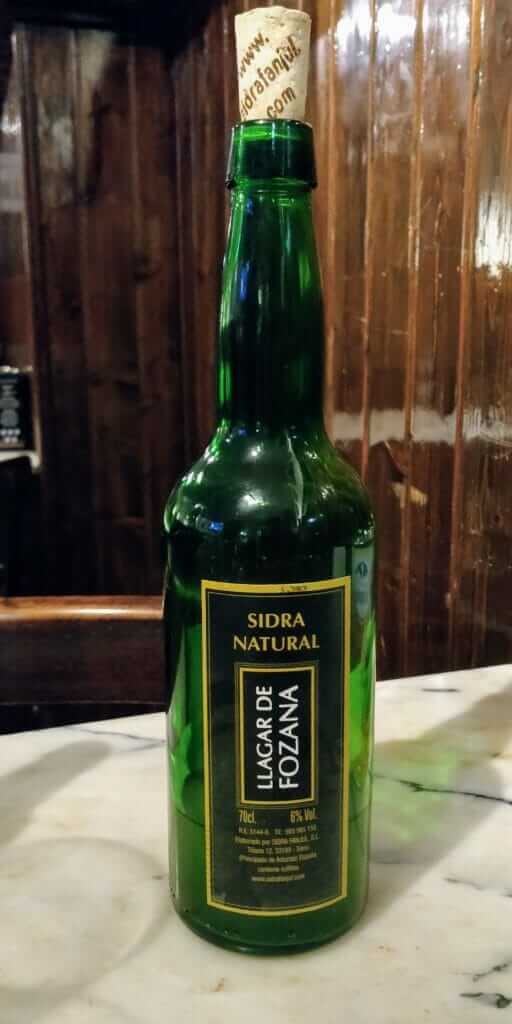 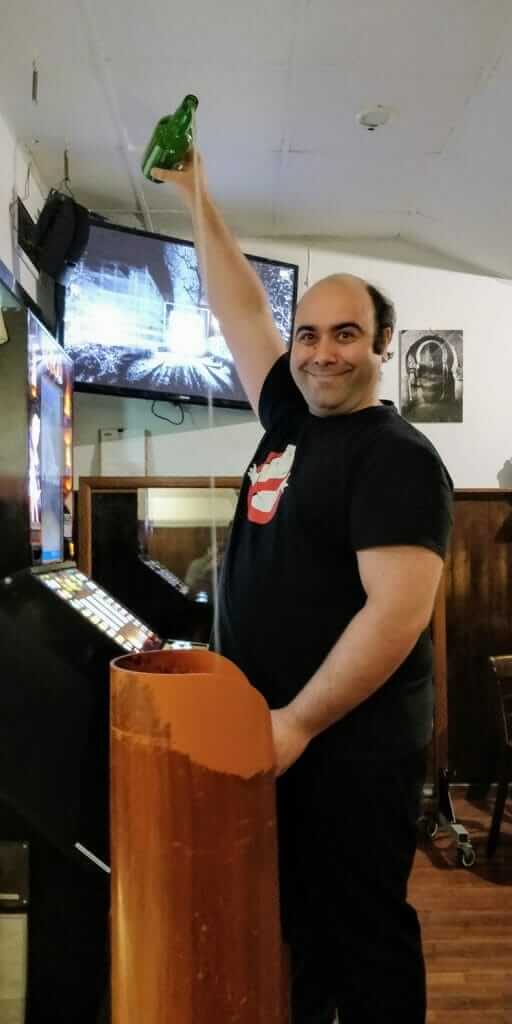 I was pleasantly surprised by this one-of-a-kind cider experience in Northern Spain. If you’re a cider lover, you must put Northern Spain on your bucket list. For the rest of you, it’s an experience you won’t soon forget.

Also while you’re in Spain, you can save a bunch of money and time traveling around with the BlaBlaCar rideshare app.

Have you ever tasted cider from Asturias, Basque, or Cantabria in Spain? Let me know in the comments below.