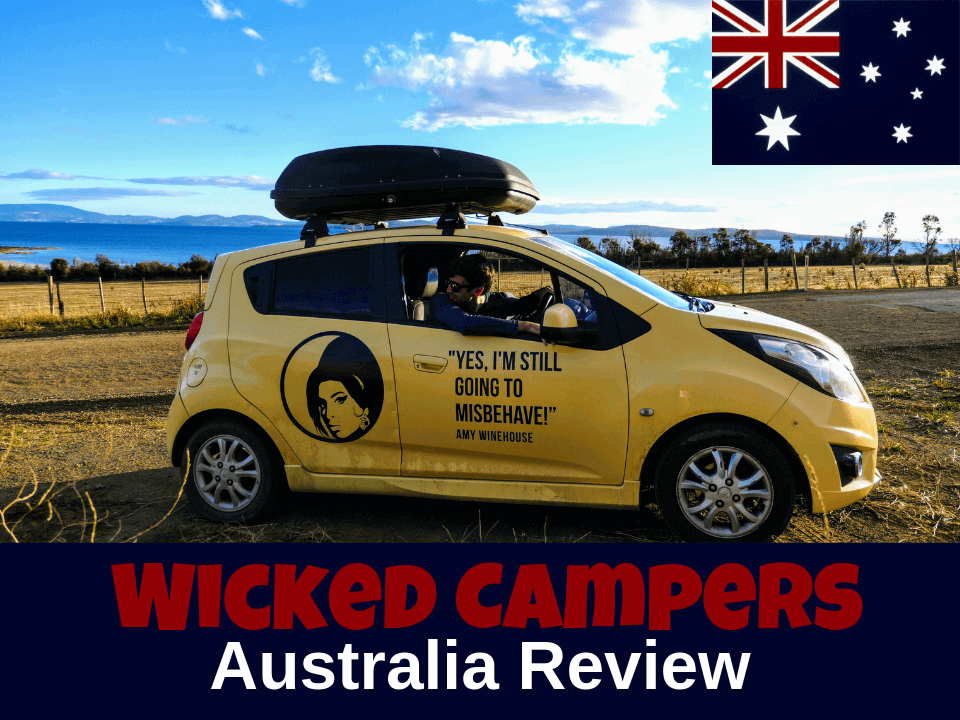 Although my one-week rental was a mini camper and not a camper van, I have enough first hand experience with Wicked Campers Australia to write a proper review. Read my Wicked Campers review below to learn my true opinion of this borderline dirty, disgusting, and vulgar camper van rental company.

Since Wicked Campers has a bad reputation for its rude and offensive references and slogans painted on the exteriors of its camper vans, I was hesitant to rent from them. But after shopping around for a budget camper van in Australia, I determined that Wicked campers was the cheapest option.

Now I’m not saying that Wicked Campers is the best camper van rental company. Actually, far from it. Rather, I’m saying that you get what you pay for.

Don’t expect a pristine camper van or superior customer service. I didn’t get any of that. Instead, a rental from Wicked Campers will get you a drivable vehicle at a cheap price.

Within days of landing in Australia, I began to see the infamous Wicked Camper vans driving around. From that point on, I couldn’t go anywhere without seeing at least one of these bizarre and colorful painted vans.

Some camper vans were more offensive than others. While one van might feature an inappropriate sexual reference, another van could be depict illegal drug use. I’m not going to feature any of these images on my blog, but if your curious just do a Google image search for Wicked Campers and you’ll see what I mean.

I hate to say it, but these vulgar phases, slogans, and paintings are iconic to Wicked Campers. It gets people talking. It’s memorable. In a sense, it’s really clever advertising. With that said, it definitely lacks sophistication.

But in the end, most budget backpackers will look past the exterior of these vans and see them as a practical means of traveling. That’s pretty much where my reasoning landed me; however, I luckily ended up with this acceptable yellow mini camper car. 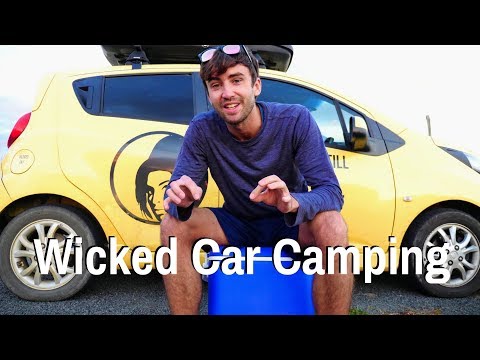 So I actually didn’t rent a camper van from Wicked Campers, but rather a mini camper car. Since it was just me, I didn’t need a large, gas guzzling camper van.

To my delight, Wicked Campers mini camper cars don’t feature the same vulgarness as the camper vans. Instead, they are painted a solid color with a quote and headshot of the author. Well, that was at least the case for me in Tasmania.

Remembering that a driver sits on the right in Australia, the quote on the driver side of my mini camper read:

And the quote on the passenger side of my mini camper was:

Always forgive your enemies – nothing annoys them so much.
― Oscar Wilde

All in all, not too bad compared to the camper vans.

Should You Rent From Wicked Campers?

If you can look past the exterior of the vans or just don’t care, you’re halfway there.

In addition, let me reiterate that the vehicles tend to be older and run down with hundreds of thousands of miles on them. They work, but barely—the check engine light was on for at least a quarter of the time in my vehicle. I’m not sure how roadworthy Wicked Camper vehicles really are, but I’m sure you wouldn’t be the first to experience a breakdown.

With that said, I see Wicked Campers camper vans and mini campers as an affordable option for budget backpackers.

Even after reading this Wicked Campers review, you still don’t think it’s something for you, perhaps a free camper van rental relocation is more like it. On the other hand, if you can’t wait to get your hands on one, you’ll be shocked to find out that Wicked Campers has over 40 locations around the world.

I’d love to hear from you. Let me know what your Wicked Campers experience was in the comments below.